I offer this as evidence: 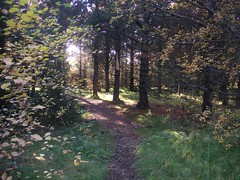 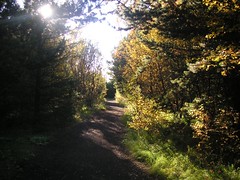 These were taken in the Elliðaárdalur valley, in the east end of Reykjavík, a couple of weekends ago, when the leaves were just starting to change colour and the sun was turning everything golden and sublime. Ellðaárdalur is one of Reykjavík’s most lovely spots; it even has a salmon river running through it: 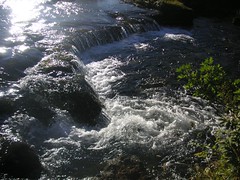 Incidentally, just after taking this picture: 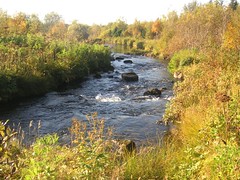 … from approximately the same spot as the last one, I walked a few metres along the river and managed to lose the battery from my camera.* I searched and searched until I was starting to attract attention [i.e. some creepy guy kept cycling back and forth, evidently interested in my activities] but to no avail. So if you find yourself in that precise spot, and you happen upon a little grey cylinder that looks like it contains toxic materials, kindly notify YT. It’s probably mine.

TODAY’S WEATHER IS NOT AS DELIGHTFUL
… as the weather above, although the sun is out. It’s damn windy, that’s why. And winds from the north, to boot, which means it’s miserably cold. But don’t mind me – I’m still suffering from severe endorphin withdrawals since I can’t go out for a run on account of this cold I’ve been having so I’m in a grumpy mood. Temps currently 3°C [and a lot less with windchill] and the sun came up at 08.20 and sets at 18.05.

* The flap was loose. AAH was using the cam to take pouty teenager pics with her friends and dropped it on the floor.

PS – in case you were here earlier and you’re wondering why I made the pics smaller… I’m fiddling with my template and doing a bit of experimenting and I suspect the size of the pics is causing a bit of trouble. Obviously you can click on them for a larger version.