The House of Flying Ideas

Believe it or not, all is not gloom and doom [read: HS Orka and Icesave] here in the Land of the Nice.

A few weeks ago I accepted an assignment that consisted of looking into whether the Icelandic meltdown could really be a catalyst for facilitating fundamental social change. My client had very specific questions in mind and, among other things, asked me to visit a project known as Hugmyndahús Háskólanna, which literally translated means “The Universities’ Idea House”.

The Hugmyndahús is a really cool venture. It’s jointly run by Reykjavík University [which is all about business] and the Iceland Academy for the Arts [which is, er … all about the arts] and it’s essentially a venue for seed companies. People with great ideas apply to get in and are allocated a work space where they have an internet connection and access to essential facilities like a ping-pong table, fussball game and electric drum set, as well as less essential facilities like a conference room, kitchen and bathrooms. Needless to say they also have access to expert advice from various specialists, made available either through the university or who happen to volunteer.

The Idea House is in an old herring factory in the west end of town, near the small boat harbour and just a stone’s throw from the sea, in an area that’s been dubbed “silicon harbour” on account of the various software companies that are located there [including my dream-workplace CCP, which runs the online computer game EVE Online]. The herring factory actually stopped operating as such years ago, and during the recent *cough* boom years it housed the ueber-hip furniture store Saltfélagið, which sold things like couches that could only be purchased with a small bullet loan from Kaupthing. That furniture store went bust around the same time as all the big-shot moguls hauled ass out of here. Such a coincidence.

This is the old herring factory on the outside: 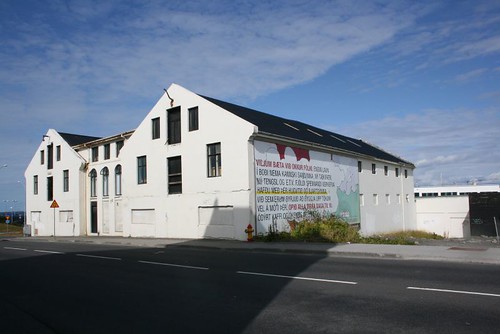 This is the cafe located inside. Anyone can come there from 8 am to 6 pm and sit as long as they like with their laptop, without any pressure to buy more coffee or suchlike. That way they can socialize with the rest of the idea house people, get inspired, get involved, etc. and all without having to rent a space. The cafe is also where the indefatigable Ministry of Ideas holds its weekly meetings on Wednesday evenings: 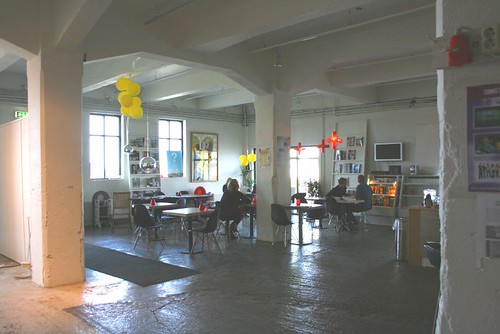 This is the former furniture showroom, which is now used for various events. On this particular day a theatre company had been showing a few performances of a play so there were swings and a big mattress in one corner and a curtained off area that was their “backstage”. This space is infinitely better suited to this kind of activity than showcasing outrageously expensive furniture that nobody can afford, wouldn’t you agree?: 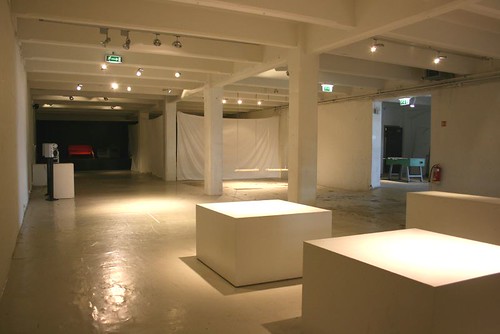 If you look closely you’ll see the words “idea station” written on the wall above the post-it notes: 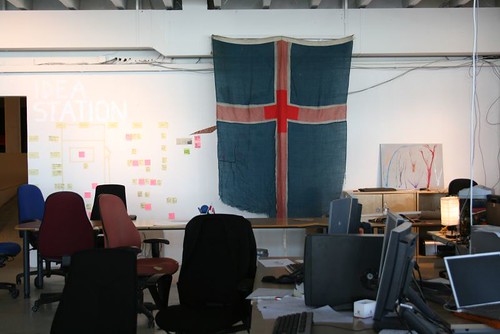 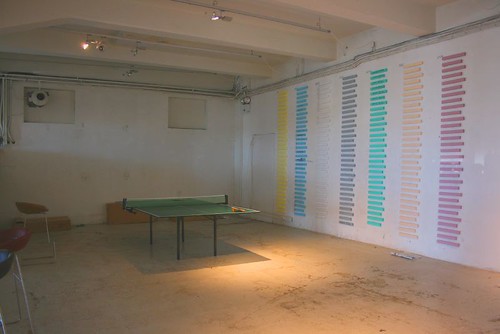 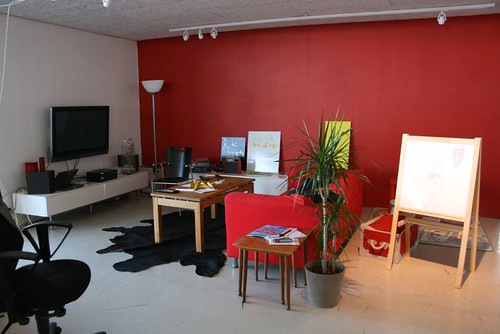 … I talked to a few people while I was there who were doing some amazingly cool things. I have to say I was most impressed by a project called Mind Games [see their Facebook page here] which is developing games for mobile phones designed to – get this – train people to focus their mind and calm their thoughts. The way it works: you have a set of headphones, and from the headphones projects a little sensor that hovers right above your frontal lobe [on your forehead]. The sensor picks up your brain waves and sends wireless signals to your mobile phone. So you’re playing a game on your phone, but as soon as your brain waves become too chaotic, something goes wrong with the game and it doesn’t correct itself until you’ve consciously calmed your thoughts and are once again starting to focus.

Is that not the most ingenious thing you’ve ever heard??

Anyway, totally enthusiastic about this place with its creative, alternative vibe and supportive atmosphere. – See? All is not lost in our fair land!

MISERABLE PESKY WIND
The autumn low-pressure areas are passing over the isle one after another, and today’s served up a generous portion of nasty wind. This is the weather I most dislike here in Iceland – when it’s so windy that any outdoor activity [including walking] is just a pain and it’s hard to even keep windows open because everything in the vicinity just blows all over the place. Redeeming point: it was mild. 11°C [52F] at the moment and rain, sunrise was at 5.45 am and sunset at 9.13 pm.

PS some more pics from the Idea House can be found here.