by alda on February 4, 2009
in Uncategorized

Our third in a series of interviews featues Icelandic singer/songwriter and activist Hördur Torfason. He is the man behind Raddir fólksins [Voices of the People], a grassroots organization that has planned Saturday demonstrations in downtown Reykjavík since last October. It is largely due to his tireless work and perseverence over the past few weeks that the Icelandic people were able to force, through protests, the recent change in government.

IWR: How are you feeling, now that the protests have produced the desired results?

HT: I feel many things … on the one hand I’m elated that some of our demands have been met, and happy about this major victory that intensive planning and perseverence have brought about. On the other hand I am absolutely exhausted. It’s been a massive comedown in the last few days. I normally sleep six hours a night; I’ve been sleeping 12 a night and I’m still tired.

IWR: When you started, did you imagine that things would turn out this way?

HT: I had nothing specific in mind. The first Saturday of the demonstrations I just stood out on Austurvöllur with an open microphone and invited people to speak. I talked to people, listened to people, wrote things down. I was indignant … I felt that my human rights were being violated, in that a few people could bankrupt my country in this way and put me and my fellow citizens into such massive debt. 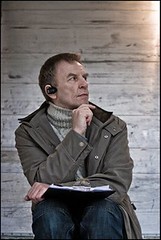 The following Saturday we had our first organized demonstration. However, I was uncomfortable with it because it focused on only one individual, making one person responsible for the entire debacle.* To me it was important for the demonstrations to reflect as many opinions and viewpoints as possible, that they truly be the Voices of the People, and not a platform for political or religious organizations. It’s been a constant effort to keep away groups that have wanted to infiltrate the movement. It has become a major draw for them when they see how successful the demonstrations are.

At the beginning of the demonstrations there was a lot of unfocused anger around, as people tried to come to grips with what had happened. Our demands really took shape on the third Saturday, as we began to gain a better focus. They were: RÍKISSTJÓRNINA BURT! [away with the government!], STJÓRN SEÐLABANKANS BURT! [away with the Central Bank’s board!], STJÓRN FJÁRMÁLAEFTIRLITSINS BURT! [away with the board of the Financial Supervisory Authority!], and KOSNINGAR EINS FLJÓTT OG AUÐIÐ ER! [elections asap!]. That is also when Raddir fólksins was formally established.

IWR: With the recent changes, what will happen to the protests? Will the Saturday demonstrations continue?

HT: I think protests will continue because I feel that we need far more radical changes than we have seen thus far. The changes have to be made so we do not fall back into the same old pattern. The forces of corruption must be eliminated. Our entire system is decayed and needs to be completely rebuilt. Besides, one of our demands has not been met – we have seen no significant changes at the Central Bank. But we have this new government now and we need to give them a chance, to see what they will do.
As for the Saturday demonstrations, I’m not sure. We’ve reached a major milestone and that always calls for reflection. At the moment I’m taking a breather, considering my next move.

IWR: We have elections coming up in April … will you or Raddir fólksins stand for election?

HT: No. I am not a political person. I have no political or religious affiliations. I am an artist and it is my job to criticize and to fight for human rights. As far as I know, none of the people who have taken part in this work with me intend to run for office. Raddir fólksins is a group of independent, thinking people who want to facilitate change. But it is not a political movement.

The only thing I dream about now is going back to my daily routine, attending to my home, my songwriting, and to be able to travel and explore the world.

* The first organized demonstration focused solely on the removal of Central Bank Director Davíð Oddsson and was widely criticized. Subsequently the organizers split into two factions; however, the other did not operate for long.

[The image of Hördur Torfason was nicked from Lára Hanna and is used by permission.]