by alda on August 2, 2010
in Travel & Reviews, Uncategorized

One of the most pleasant surprises I had during our hiking excursion was the level of vibrancy and energy among the people of the West Fjords. Literally every place we came to there were people doing innovative, creative things that are bringing life to the area — it was incredibly inspiring!

Not too many years ago, the West Fjords was a depressed area of Iceland. Traditionally a region made prosperous by fishing, once the fishing quotas were implemented and made transferable, large companies bought up the quotas and moved them out of the area, virtually killing the fishing industry in many locations.

The region went through a series of traumas in the last couple of decades, including two devastating avalanches, in the towns of Flateyri and Súðavík. I remember both very well — they were events that united the Icelandic nation in grief and compassion, and as I had recently moved back to Iceland at that time, it felt very poignant to me to experience that kind of unity. I’d never been to either of those towns before last week [we stayed about a ten minute drive out of Flateyri] and going there and seeing the memorials to the people who died was very powerful.

But I digress. What particularly impressed me now were all the places that had opened up, and their high standard. I ate three meals in restaurants while I was there, all of which were outstanding, and visited three incredible cafés. More on that later.

Also, in several places, museums of various sorts have been set up, either by the locals or by people who moved to Reykjavík and have now come back to help revive their home towns. These include the Museum of Witchcraft in Hólmavík, the Skrímslasafn [Monster Museum] in Bíldudalur and the old Machine Shop in Þingeyri. From what I’ve been told, they’ve been a real injection of energy and have attracted tourists to places that people previously just drove through en route to somewhere else.

To say nothing of all the different tourism services, hostels etc. that have been set up.

The West Fjords are so incredibly beautiful, with their magnificent mountains, deep fjords and unspoiled wilderness … and it is such a joy to see the area rising and the residents taking pride in their home regions. 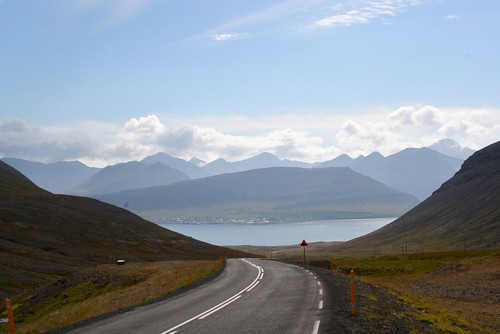