I have been doing some work for Reykjavík Excursions, which as some of you may recall was once the primary sponsor of this site. After I stopped updating [regularly] they got in touch and asked if I would be willing to help them rework the text on their website, with part of the deal being that I need to test out their excursions before I write about them.

I know. It’s a tough deal, but somebody had to say yes.

So I went on an excursion a couple of days ago that was so great that it got my fingers itching to write a blog post. Because the thing is, you can’t really tell a story on the Facebook site that involves pasting in loads of photos [well, not EASILY, anyway].

Anyway, the excursion of which I speak took us up to the foot of Mýrdalsjökull, the glacier where the dreaded Katla volcano lives.

We started by driving to Vík, a small town on the south coast nestled in among some amazing scenery. This includes Dyrhólaey, literally “door hill island”: 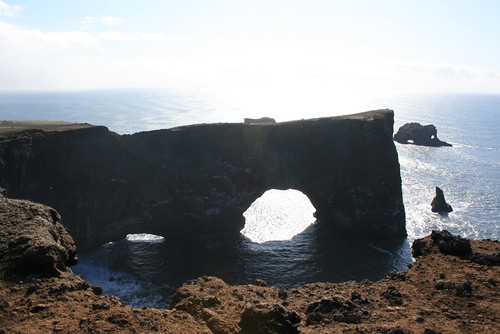 And Reynisdrangar, a group of pillars sticking out of the sea: 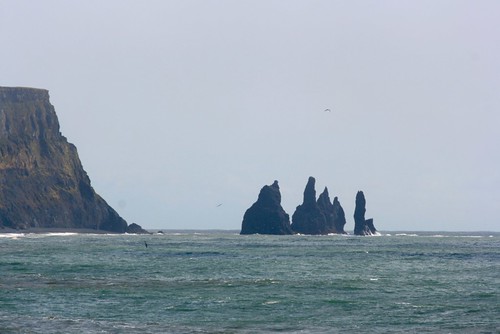 We got to see both from different angles … first Dyrhólaey from the other side: 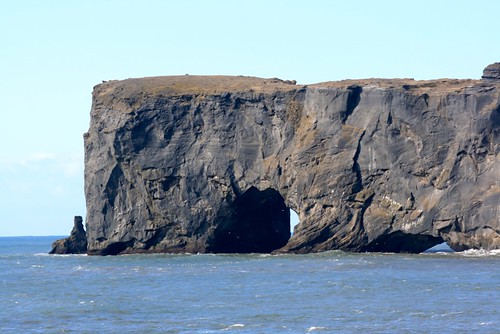 Then Reynisdrangar from Mt. Reynisfjall, which towers over them and which has an alarmingly steep road leading up onto it, NOT FOR SISSIES but totally worth it for the view: 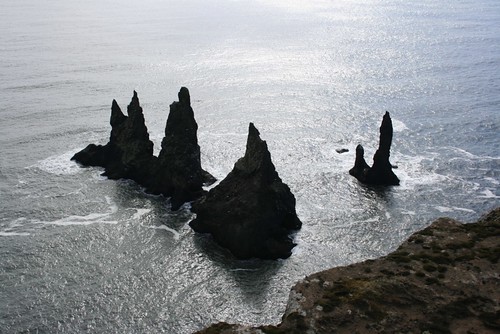 By this time it was only noon, and our Katla excursion was just starting. After a hearty bowl of lamb soup in Vík, we climbed into our trusted megajeep and headed out into the Mýrdalssandur desert. Those are black desert sands that stretch from Mýrdalsjökull glacier and down to the sea. If you’re on there when Katla erupts, you’d want to have your wits about you, I’llsaynomore. Some people claim you only have about 20 minutes [Katla melts the glacier and sends a flood of water and humongous icebergs and boulders surging forth across the sands] to get the hell out of dodge. Fortunately, today there are loads of sensors and equipment that closely monitor all movement in the mountain, so they’re pretty good at predicting when she’s gonna blow. At least our guide, Guðjón, gave us a lengthy and, I must add, rather reassuring description of how he would respond if the call came through his nifty emergency radio and he had a group of tourists on board. Guðjón is from the area, and he knows his stuff. Here he is, telling us a ghost story in an emergency hut that’s located nearby and where superstition has it that you have to stop and drink coffee if you’re passing by, otherwise the ghosts will be angry: 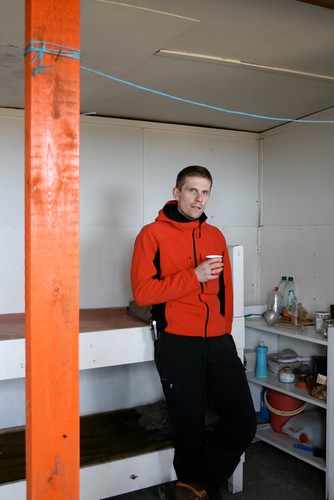 But that came later. FIRST we drove right up to the foot of the glacier, which was an experience that can hardly be described in words. You feel like you’re alone in all the world out there. It feels completely untouched by man, and the power of the nature that you sense all around you is completely humbling. The glacier itself is awesome … it looks like it’s made of marble, and was so beautiful that I had trouble keeping my eyes off it. 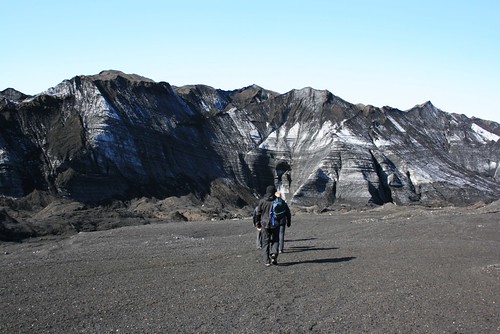 It may not look like much here; unfortunately the photos hardly do it justice.

We had to take great care, since there can be quicksand, created when large clumps of ice melt into the sand. You may be walking along thinking everything is perfectly hunky dory, when BAM! suddenly you’re swallowed into a black hole. Probably something you’d like to avoid. In our case, Guðjón walked ahead with a stick, testing the ground. And where we were headed? To this little watefall that emerged from the glacier and which was absolutely stunning: 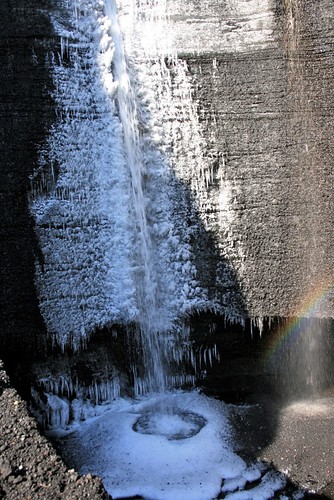 I particularly like this photo. It kind of looks like the sinister face of Katla on the left; that is, if you believe in that sort of thing: 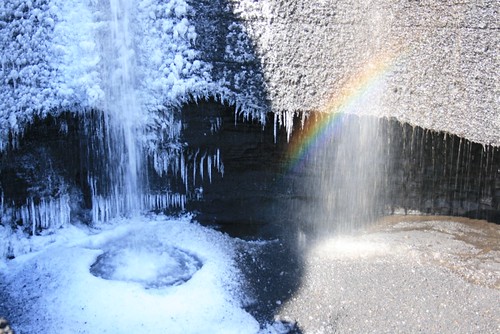 We stayed there for a while, just marvelling at the bizarre beauty of it all. It was truly awesome, and a little bit overwhelming, what with the knowledge that you’re standing next to this force of nature that could easily bring civilization as we know it to its knees – for a few days, at least.

Anyway, heading back along a circular route, we stopped at said emergency hut that is supposed to be haunted. Not that you’d particularly care if you were forced to stop there for any reason: 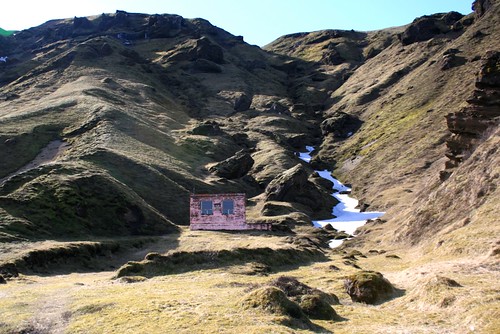 You’d probably not care too much about the mice-eaten blankets, either, or the fact that you’d have to put on pink trousers if your clothes were wet: 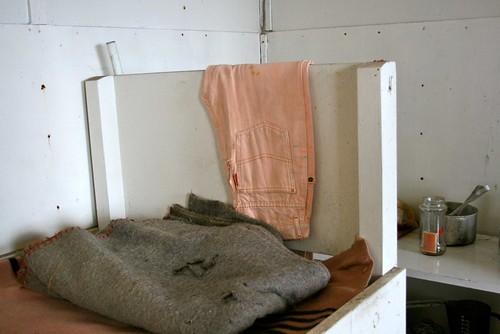 … Or the condition of the windowsills: 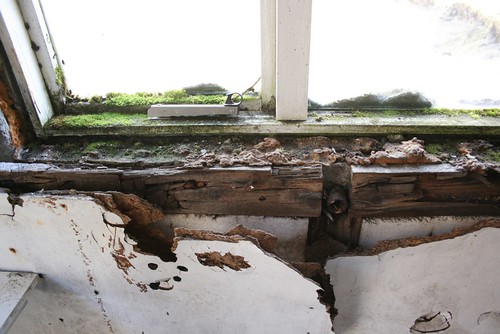 So having had a cup of coffee there [we don’t want to incite the wrath of the spectres in the area, after all] we headed on down to Hjöleifshöfði, a headland at the foot of Mýrdalssandur. There we stopped at a cave, where we were told everyone had to sing a song. The cave: 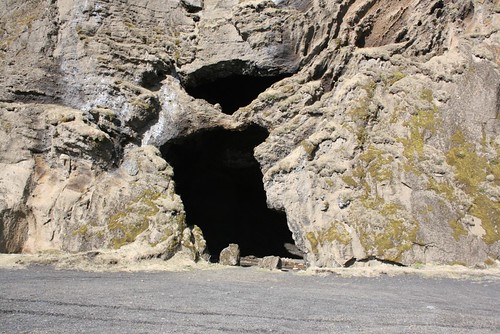 Guðjón had the great foresight to bring a guitar AND lyrics to the song we had to sing: 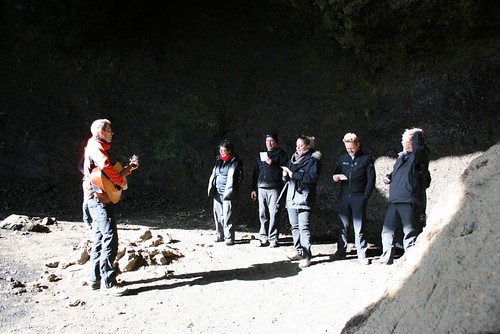 … After which we were rewarded with some refreshments: 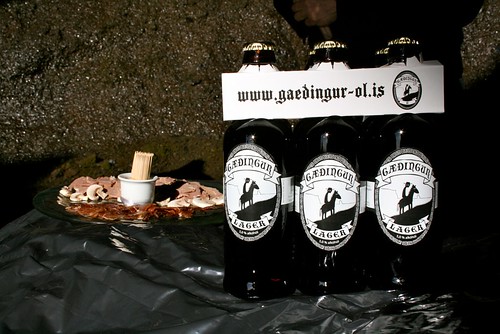 NB. I am told that the guitar and refreshments are not a part of the tour proper. We just got lucky.

And so, a great time was had by all. I highly recommend this excursion [though I am told the refreshments are not necessarily included under regular circumstances, just so you know].

You can see the full set of photos here.

Previous post: This site is currently not being updated