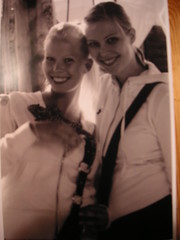 Well, the two travelling Barbies regaled us with stories of their adventures in Sicily at dinner. Barbie 1, of course, has been in Italy since January [Firenze], whereas her sister, Barbie 2, went down to meet her for the last two weeks of her stay there, they travelled around in Sicily a bit, and then they flew back home together. And I shall forthwith stop calling them Barbie, a) because [despite that adorable comment on the bus] neither one really has anything in common with the measurement-challenged icons that more often than not wind up dismembered at the bottom of a toy box and b) because my friend Greavsie has duly appropriated the name for his two daughters and I wish to avoid any confusion.

So I shall call them by their real names, or Ó and Á, respectively. Unsurprisingly, Ó was the subject of much attention in dark-skinned, dark-haired Italy; in fact, by her own account, people unashamedly gaped and gawked and groped [especially her hair] whenever she passed by, to the point that it was absolutely insufferable. She’s got the blondest hair you’ve ever seen – it’s almost white and it’s completely natural. She thinks people in southern Italy were convinced she was an albino – such were the stares, “like I was some kind of freak!” [And although there are many photographs that would support this theory, she does have very blue eyes.] And while Á&Ó thought Sicily was one of the most beautiful places they had ever seen, it was barely tolerable for the two of them because they moment they stepped outside they were harassed continually. They didn’t dare to venture outside by themselves in the evenings, for example – which can kind of put a damper on your holiday.

Anyway. The best story at dinner was one that Á told, of when they went up the slopes of Mt. Edna and had to wait around three hours before they could go back down. To them, going up a volcanic mountain – even one as famous as Edna – was a pretty ho-hum experience, sort of like walking up on Grábrók [a well known crater here in Niceland that everybody walks up onto but which really is pretty unexciting.] Their guide was this old, toothless Sicilian [well no, actually he had a total of five teeth, three in the lower gum and two in the top, and happily the teeth in the top gum fit perfectly into the gap in the lower gum – and what more do you need?], who came to sit at their table while they were waiting and ingratiated himself with conversation that went something like this:

OLD TOOTHLESS SICILIAN: Where are you girls from?
Á: Iceland
OTS: Iceland! [pause] I have only met one other person from Iceland.
Á&Ó: Oh?
OTS: Yes, it was in London many years ago [leaning over – confidential] and I must tell you… I made love to her.
Á&Ó: [recoil]
OTS: Yes, and I didn’t enjoy it very much. You see, she was very drunk.

The conversation continued along those lines, and incorporated leering comments about breasts etcetera, which I shall omit here in the interests of decency.

Another good story was this: Á&Ó enter an elevator in the hotel, occupied by a delightfully polite and friendly English couple.

MEANWHILE, THE WEATHER
Raining! Not that we have cause to complain [much] because we’ve had a couple of fine days now – sunny and mild. Temps right now 10°C and sunrise was at 02.56 while sunset is in about 15 minutes, at 24.04.