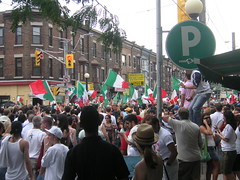 Just before we left on this trip, EPI delicately broached the subject of the World Cup.

EPI: [Nonchalantly] So… the World Cup finals will be while we’re in Toronto….
YT: Oh, too bad! They don’t play soccer over there so you won’t be able to watch them.
EPI: [Turning pale] Surely they will be on somewhere… some cafe, something!
YT: Oh, yeah. Probably somewhere.

Ah, how wrong I was! Toronto has been absolutely entrenched in World Cup fever since we got here and until… well, it still is. And of course today [or yesterday, depending on which time zone this thing works on… I’m a little confused] was the playoffs. And because EPI and I like to live on the edge, we left the comfort of the living room and headed to Little Italy to catch the game standing outside a Portuguese restaurant and watching it through the window [that was the only screen you could even get close to – all the Italian ones were taken].

By the time we got there, the place was crawling with Toronto’s Finest [police force]. By the time 10 minutes were left of the game, they had added a special riot squad in a truck that looked very much like a tank, and pretty much doubled the number of cops. Just in case, like.

Thankfully none were needed because nothing but jubilation engulfed us when the results were clear? The whole street exploded in celebration. [Probably the only person not shouting was EPI, who was – very quietly – rooting for France and who had become increasingly desolate in the wake of Zidane’s bizarre butting-ram impersonation, and YT who didn’t really care who won]. There was dancing and hugging and incessant shouts of IT-AL-YA! while car horns blared and red-white-and-green flags flew everywhere.

We vacated the area pretty soon, only to return in the evening because we wanted to go to a nearby restaurant. On both occasions there were crowds of people streaming towards Little Italy and I’m willing to bet they’ll be partying throughout the night. Just hope nobody ends up in the back of that special riot truck because that mutha looked pretty damn scary.

Next post: In which I rave about Bonnie Raitt

Previous post: You may think this trip is all about glamour and glitz, but I assure you it is not